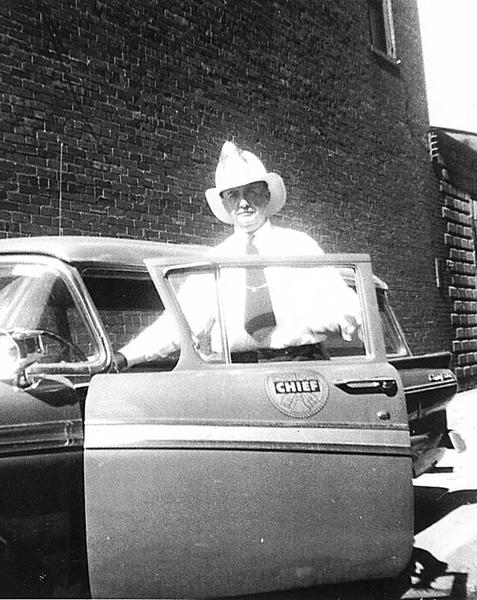 From a rather humble beginning in a stable with a horse drawn, hand operated, fire engine and a handful of concerned citizens, the Erlanger Volunteer Fire Department has evolved into a two station department that is equipped with a wide variety of first class fire apparatus and manned by paid personnel.

Shortly after Erlanger was incorporated in 1897, the city’s board of trustees decided to purchase a fire engine to protect the citizens and their property. This was accomplished in 1904 when the Howe Engine Company supplied our first engine for $700. The apparatus could be hand pulled or horse drawn and consisted of a 60 gallon oak storage tank with a hand operated pump mounted on four wagon wheels. Up to 14 men could position themselves around the hand operated pump. Andy Scheben, Sr., was appointed fire chief and the apparatus was housed in his stables which were part of the Scheben Hotel/Restaurant located at the corner of Commonwealth Avenue and the old Lexington Pike (Dixie Highway).

About 1910, the fire engine was moved to Taliaferro’s Livery/Mortuary. Misfortune struck about 1918 when someone forgot to put salt in the tank water and the pump was destroyed by a heavy freeze. A replacement consisted of a 60 gallon soda-acid two wheeled tank which was equipped with 25 feet of rubber hose and a handle. This unit was usually pulled to the fire scene by holding the handle while riding on the back of a wagon. When Dempsey’s Garage was built in 1921, this apparatus was moved across the street into the new garage. To supplement this portable tank, a new “Reo” fire truck was purchased from Covington by the VFW about 1925. It was also housed in Dempsey’s Garage.

In 1928, the Erlanger Board of Trustees passed an ordinance creating the position of fire chief and authorizing the organization of the Erlanger Volunteer Fire Department. Andy Scheben, Jr., became the fire chief and inspector. A 500 gallon per minute pumper equipped with a large hose bed and a 200 gallon water tank, the top of the line for that day, was purchased in 1929. This vehicle was powered by a 12 cylinder Studebaker engine. The new equipment was used at the huge Boone-Kenton Lumber yard Fire in 1931 and pumped for 18 straight hours in an effort to control the fire.

On October 29, 1931, amidst much fanfare including a parade and guest speakers, the fire trucks were moved to their new home on Erlanger Road in the rear of the Scheben Hardware Store next door to the city hall. Following World War II, a 500 GPM 1952 Ford replaced the Reo. In 1959, the old Studebaker was replaced with a 500 GPM GMC. After 31 years at the Erlanger Road location, the fire department moved its equipment to the new city building at the corner Commonwealth Avenue and Baker Street in 1962. A four wheel drive jeep was converted into a rescue truck in 1963. Since the fire department had moved away from the center of town, an additional fire station was opened in 1965 on Alice Street (now Jack Scheben Drive) to serve the rapidly developing areas east of Dixie Highway. With Erlanger’s population increasing beyond 12,000 in 1970, and with a corresponding increase in commercial property, larger capacity pumpers were needed. A 1000 GPM Pirsch was purchased in 1970 and a Sutphen 85 foot Aerial Platform, the only one of its kind in Northern Kentucky, was purchased in 1975. A 1975 GMC Rescue Truck replaced the jeep for rescue operations. 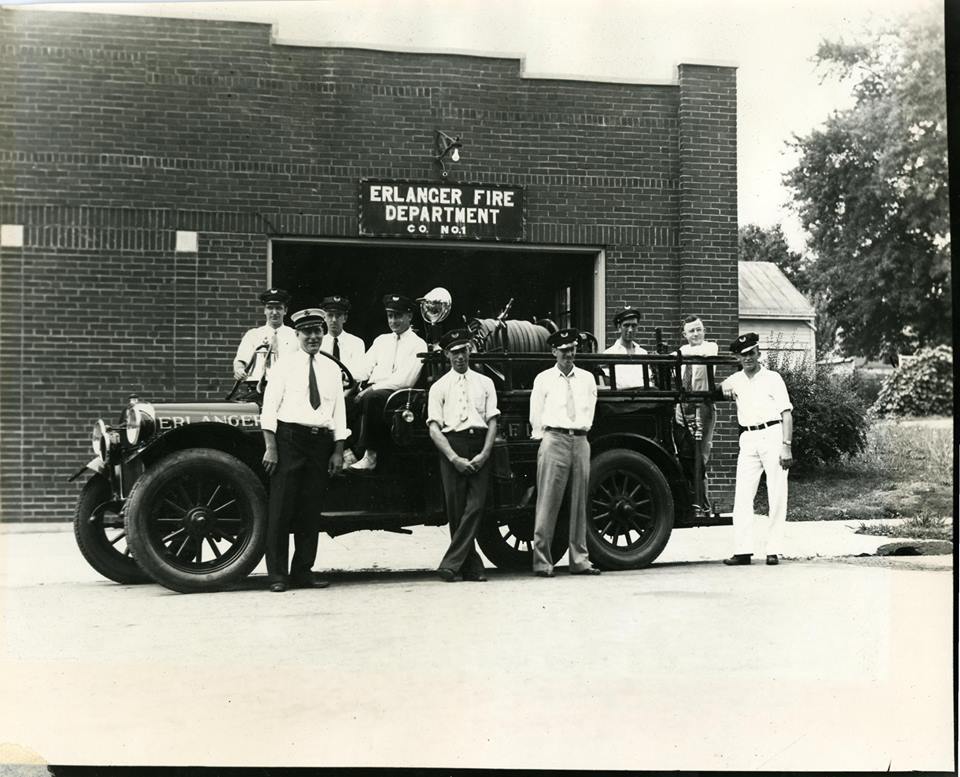 Meanwhile, Station Two obtained a 1000 GPM pumper that differed from other equipment in that the control panel was mounted on top rather than the side. This enabled the engineer to view the entire fire scene without moving. Once again, the quarters at Station Number One was becoming cramped, so a new fire station was built on Graves Avenue in 1979 directly across the street from the from the old station. To serve the expanding neighborhoods of the city in the Narrows Road area, a third fire station was opened in 1991. Major improvements were made that year as two new pumpers were added to the department and Bill Martin, the first paid fire chief in the department’s history, was hired. In 1992, the Erlanger Rescue Squad merged with the Erlanger Fire Department to create Erlanger Fire and Emergency Medical Services under the direction of Chief Martin.

In August 1996, the Erlanger Fire & EMS Department was honored with the selection of Jack Scheben, a volunteer in the department for 50 years and former chief, as National Volunteer Firefighter of the Year. This award was presented to Mr. Scheben in Kansas City by the National Volunteer Council. Mr. Scheben’s service on the department exemplifies work done by the many volunteers who have served on the Erlanger Volunteer Fire Department for more than 90 years. His award is a tribute to each of them.

As of 2020, the staffing includes 33 full time Firefighters/Medics/EMTs.